We will have a fundamental course today, the interface setting of a Cisco device. I am going to introduce some terms that we always see in network lessons instead of talking too much theory. Let us start from show interface to check what parameters we can configure.

It shows what the Interface type is, Fast Ethernet or Gigabit Ethernet? If it is a VLAN Interface, EtherSVI will be shown here. SVI means Switched Virtual Interface. The address shows at the end is the MAC Address of the Interface.

You may put some note on this Interface. A network administrator will always put the Host or Switch that this Interface is connecting to. Use the following command to change the description.

MTU is abbreviation of Maximum Transmission Unit. Many years ago, network connection use shared media, such as, use Hubs to connect the computers. But the operation of Hubs is different to Switch, it only allow one host to transmit at the same time. The transmission speed is low at that time, MTU can avoid a computer dominate the network resource. If a host wants to send data that is larger than MTU, it needs to do the fragmentation to divide the data into pieces that are smaller than the MTU. The default value of MTU is 1500 Bytes. For example, if Host A wants to send 4000 Bytes data, the data will be divided into two 1500 Bytes and one 1000 Bytes frame to transmit. We always keep the MTU as default value.

When we set the MTU too large, if some network devices along the path do not support such large MTU, the data will be dropped. On the other hand, if we set the MTU too small, bandwidth will be wasted for the L2 frame header (destination MAC Address and other information) and frame trailer (Error Check Sum). The total size of header and trailer is 18 Bytes. So, small MTU will increase the number of small frames so that bandwidth will wasted on the 18 Bytes long header and trailer.

If you still want to change the MTU after very careful consideration, use the following command. The setting will be valid after restarting the switch.

The bandwidth value of the interface. Use Bandwidth to change the value.

But change the bandwidth value of the interface do NOT actually change the transmit bandwidth of an interface. It is only a reference value for Routing Protocol or Spanning Tree Protocol to calculate cost.

DLY is the delay value of an Interface. It is different to bandwidth but they have relationship. To explain bandwidth and delay, think the network connection as a tunnel of cars. The cars are the network data. Bandwidth is the number of cars that can pass through this tunnel every seconds, it depends on the width of the tunnel. Delay is how long a car is needed to pass through the tunnel. Take Hung Hom Cross Harbour Tunnel in Hong Kong as an example, it has a very small delay (only 1 minute for passing through if there is no traffic jam). But the bandwidth is also very small……😡 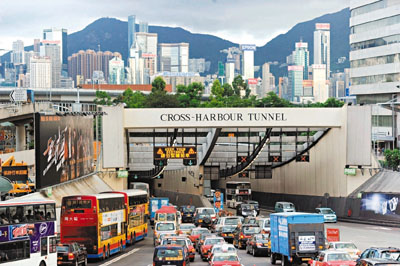 An important concept. The 3 Communication Channel are, Simplex, Half Duplex and Full Duplex.

Simplex is a unidirectional transmission. One side send out data and the other side receive. Traditional television channel are simplex. TV company generates signal at the microwave station and the television receive the signal by antenna.

By using Half Duplex, data can be transmitted and received in both directions. But it only allows one direction transmission at the same time. Think about the walkie-talkie, when you want to talk, press the button to occupy the channel. Then, release the button after finish speaking and waiting for reply.

Interface of Cisco devices do not support simplex. Auto is the default duplex setting, you may set Half Duplex or Full Duplex manually by using the following command.

Speed is limit of how fast the Interface could send the data on to the wire. It may be configured as 10, 100, 1000 or more. The default is auto and it may be changed by using the following command.

There are many choices for media type. Normally, we do not need to configure the media type. But what is the meaning of 100BASE-T, 1000BASE-CX that we always see on the product datasheet?

The number that in front of BASE represents the bandwidth. We can see the following different types.

The characters that behind the Base is the most complicated part. The first letters represents the cabling type.

The second letter is the Coding Scheme. Encryption (or called coding) is needed before a binary data is translated to electrical signal that send to the network cable to ensure that there is no transmission error. Coding Scheme is the method of encryption. Take is easy, it is not the learning scope of a network engineer.

The QoS (Quality of Service) settings of the Interface. We leave it to the tutorial of QoS in the future.

At last, there is a large amount of numbers. They are counters of the interface. The counters record the statistics of the interface from system booted. When we want to troubleshoot an issue, we may focus on counters like error and CRC. If these counters increase continuously, it may be a L1 problem.

Sometimes, we want to reset the counters. Use the following command.