WEP (Wired Equivalent Privacy) Hacking is already an old topic. It is really not easy to find an Access Point (AP) which is still using WEP to hack nowadays. However, to understand the method and steps for hacking WEP really helps for learning Kali Linux. It also helps for learning hack to WPA and WPA2. We can search millions of articles describe how to hack WEP with step by step procedures. But they seldom talk about the theory. I will explain the WEP vulnerability in this article.

⛑️  Please be reminded that the aim of this article is to explain the network threats and how to eliminate the issue. Illegal activities are not encouraged⛑️

Since wireless signal is transmitted through the air, anyone can receive it. So, the transmitted messages are needed to be encrypted. Symmetric Encryption is a good choice. It means that the transmitter will use a common shared key to encrypt the message. And the receivers will use the same key for decryption. For details, please see the article that about Cryptography.

But it is easy to be cracked if the same key stream is always used. So, a 24bits number is added to RC4 to generate Key Stream with the shared key. It is called Initialization Vector (IV). Every time when a message is sent, a new IV is generated in order to have different key stream. So this is the encryption algorithm of WEP.

In the following diagram, the procedure of transmitting from AP to client is shown. Please be reminded that the IV is transmitted without encryption, it can be captured with the encrypted message if someone wants. On the other hand, if a client wants to send data to AP, the procedure is same except the client will use the IV that is created by the client itself. 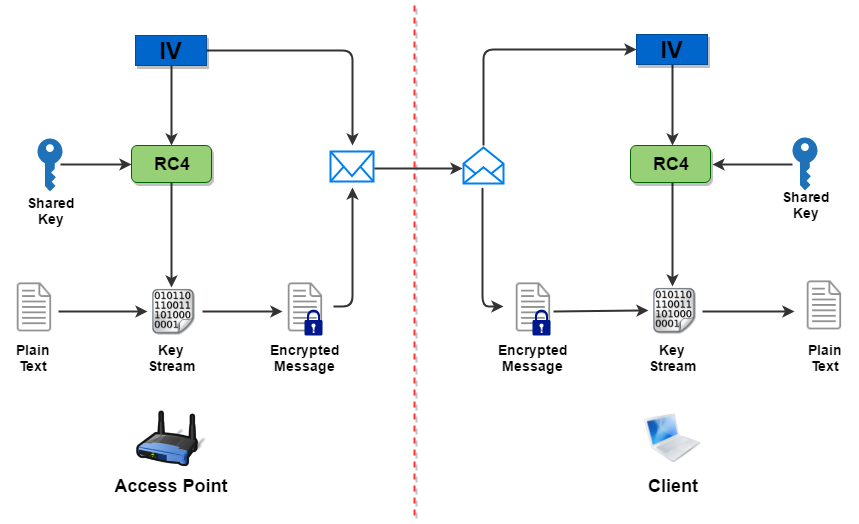 A history lesson first, RC4 is designed by RSA Data Security Company in 1987. Originally, it is a RSA proprietary encryption method. In 1994, the source code of RC4 is posted on the Internet. After that, someone modify RC4 to become ARC4 and ARCFOUR. All these things are called RC4. RC4 is commonly used due to its small resource expend and high efficiency. Although the source code is opened, it is still hard to crack if the key is not known.

However, add IV to RC4 helps cryptographic experts to know a small part of key stream by using Mathematic method so that a small part of shared key is also known. Theoretically, the entire shared key can be calculated by collect a large amount of IVs. So, the direction of cracking WEP is to capture a large amount of IVs and put them into analytic tool to compute the shared key. The success rate is proportional to the number of IVs. Here are some famous Mathematic methods for cracking shared key,

Aircrack-ng is the most famous and powerful Wireless Encryption Shared Key cracking tool. It can be found in Kali Linux. A wireless LAN card that support monitor mode is also needed for cracking. The following brands and models are compatible to Kali Linux (Debian),

First, enable monitor mode of the wireless interface. A monitor interface will be created.

Then, scan the wireless signal and see whether there are any APs still using WEP? Of course, you cannot find one. So, I have prepared a wireless router for testing. Remember the BSSID (MAC Address of the AP), Channel and ESSID.

Since the target is using channel 11, change the monitor mode to focus on channel 11 for the attack.

Use airodump-ng -c 11 --bssid 00:24:A5:BC:15:5D -w output wlan0mon to capture frames of the target AP in channel 11 and save them in the file called output. Now, what we need to do is waiting for enough number of IVs to launch the cracking.

Let us check how an AP accepts a client first. When a client wants to associate to the AP, it sends an authentication request to the AP. Then, the AP generates a random text (also called challenge) and sends back to the client. Then, the client uses its own IV and shared key to generate key stream to encrypt the challenge. The encrypted challenge and the IV will be sent to the AP. Finally, AP uses the received IV and its own shared key to generate the key stream to decrypt the encrypted challenge. If it can be recovered to the original challenge, the AP trust that they have the same shared key. 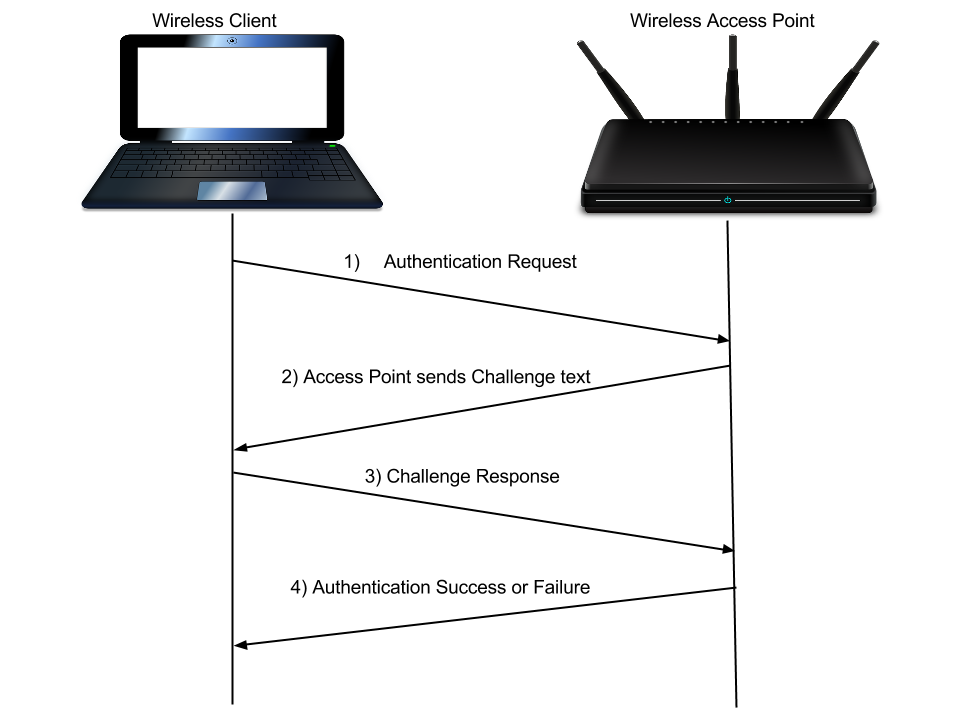 Unfortunately, attacker can capture the frame which contains the challenge and the encrypted challenge to compute the key stream (not shared key) as well as the IV that used in the frames. Later, the attacker send authentication request to the AP, and use the key stream that computed before to encrypt the challenge and send it back with the captured IV to the AP. The beauty of the fake authentication is the attacker can cheat the AP even he or she never knows the shared key.

Now, open a new terminal to implement the fake authentication. Use aireplay-ng -1 10 -a 00:24:A5:BC:15:5D -h 9C:EF:D5:FE:4B:1B wlan0mon command where 10 means that the attack will be implemented every 10 seconds. –a is the BSSID of the AP. –h is the MAC address of the attacker’s interface. If the attack successes, the message “Association successful” will be displayed.

Open a new terminal, use aireplay-ng -3 -b 00:24:A5:BC:15:5D -h 9C:EF:D5:FE:4B:1B wlan0mon to implement the ARP Request Replay. In order to replay successfully, there must be at least one ARP request appears on the network. It should be fine for a normal network. For the testing network however, there may not have any network traffic. For this situation, you may associate a client to the AP and create an ARP request by using ping.

At last, use aircrack-ng to crack the shared key. But, tens of thousands IVs are needed even used PTW. So, is it needed to collect enough IVs before implement the key cracking? No, the cracking and capturing can be run simultaneously. So, we should run the capturing, fake authentication, ARP replay and cracking at the same time. One to two minutes is enough to crack a shared key if lucky.

Obviously, WEP is already compromised to the attack and should not be used in the wireless network anymore. It should be replaced by WPA2 or 802.1x authentiation method.